This section describes the 4 steps to prepare a dedicated AWS account for the Ascend Enterprise deployment.

With the account you've created in step 1, please request an increase in EC2-VPC Elastic IPs here. The new quota must be at least 8 IPs. Typically these requests are approved in a few minutes. 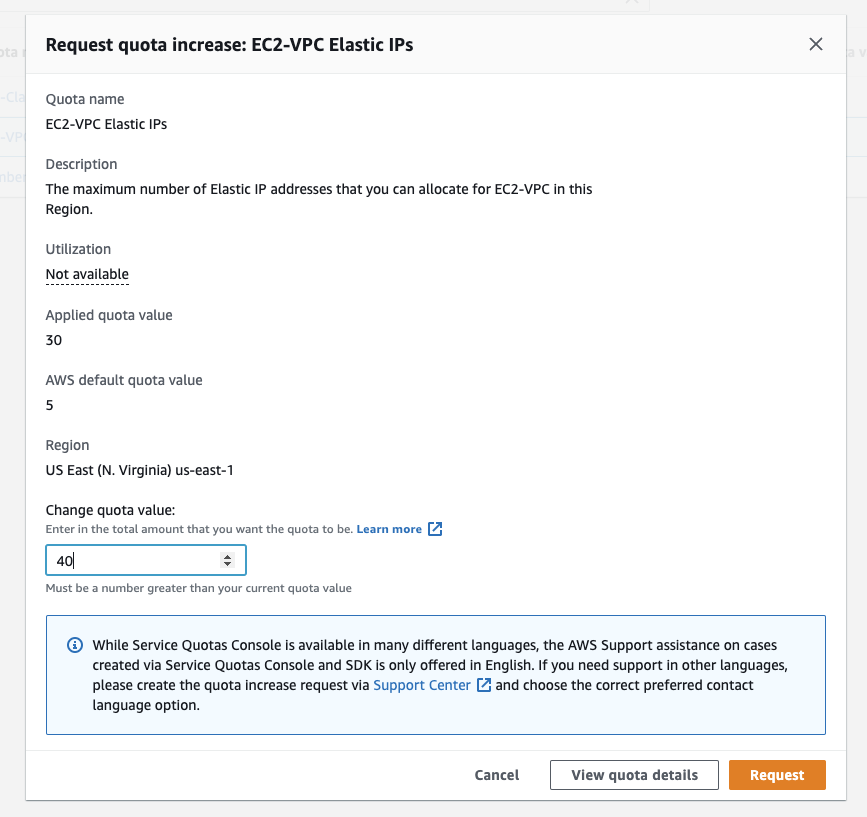 Navigate to the CloudFormation service and create a new stack:

Make sure that you are creating the CloudFormation stack in the same region as your desired Ascend deployment region, otherwise the access will not work correctly (Ascend's access with this template is scoped to the region where it's deployed).

Make sure to select "With new resources (standard)" when creating the stack.

Make sure to replace REQUEST_FROM_ASCEND with your External ID

Your Ascend support representative will send you an External ID that looks like a random universally unique identifier (UUID).

You must replace the placeholder value REQUEST_FROM_ASCEND in the screenshot above with the value given to you by your Ascend support representative. Failure to do so may result in your environment deployment being delayed.

You can skip through to the end now to create stack. You will need to check the box on the review page to acknowledge that this stack is creating IAM resources

Finally, verify that all resources come up correctly. If you have any problems, feel free to email [email protected] and we'll help you get the problem sorted out.

Please change AWS support plan to “Developer” or higher if the Organization is not set up with this yet. 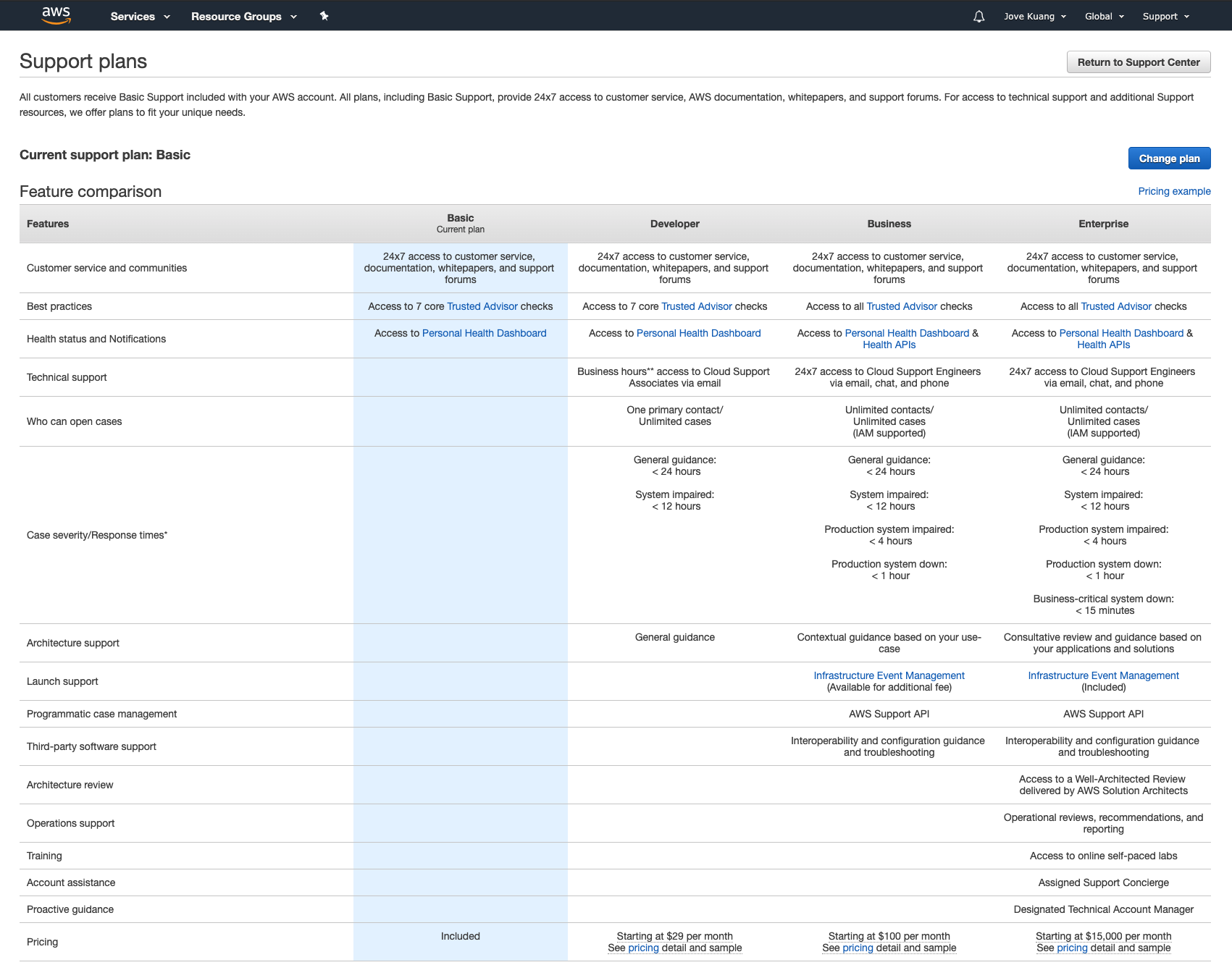 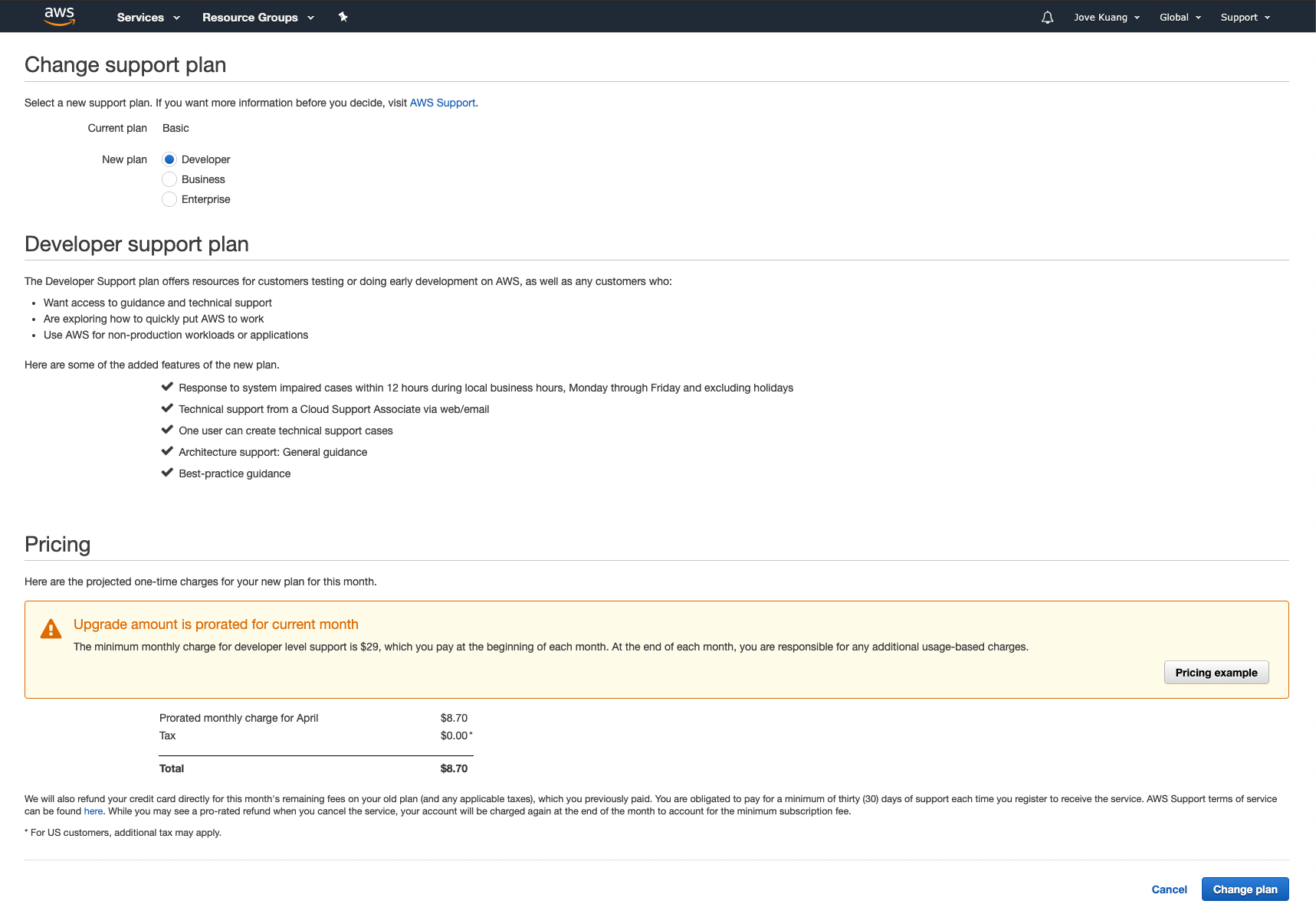 Once the above 3 steps are completed, please send an email to Ascend at [email protected] including the following:

Ascend will be responsible for new software releases and maintenance of all services within this AWS account.

Ascend operational systems require access to the AWS account at all times to ensure reliability, performance, and code deployments. For long term maintenance, the customer may reduce Ascend's access by editing the CloudFormation template to remove the ASCENDPOLICYPROVISIONING policy, or swapping the template source to https://s3.amazonaws.com/ascend-io-public/ascend-cross-account-access-maintenance-cf.yaml, which you can download to view from here.

If you encounter an error like the one below, you will need to delete and recreate the CloudFormation stack.

Make sure to save the EXTERNALID configured to the stack

Once upgrades are complete, reduce Ascend’s permissions to Maintenance level by updating CloudFormation Stack again, using https://s3.amazonaws.com/ascend-io-public/ascend-cross-account-access-maintenance-cf.yaml as the S3 URL for Step 3.

Ascend's platform is different from typical data platforms because it is able to both allow users to launch custom code workloads on the Ascend platform, while limiting that code to only access the data that the user who authored it is permitted to access. Part of the way we enforce that is by not granting instance-level roles for data access. In fact, we cut all pods off from being able to access the ec2 metadata service in order to eliminate that risk.

As part of this, we create 6 AWS IAM users and key pairs.

The first of these users is used for the sole purpose of accessing S3 data. In Enterprise plans, it is paired with bucket-level access origin protections in order to further guarantee that all data access comes from trusted processes in the customer's Data Plane.

The next two users are used by the cluster autoscaler process in each of the two kubernetes clusters. They are granted basic autoscaling describe, and the ability to set capacity and terminate instances in the autoscaling groups they manage.

The next 3 users are actually specific to EKS access: EKS is unlike the managed kubernetes services from other clouds, it is not possible to grant access to it without a backing AWS entity. As such, for each use case of a kubernetes service user that needs access from outside the cluster, there is an associated user. Further, all of these users actually look identical from an AWS permissions perspective because the only access they have is the basic permissions required to attempt to authenticate with EKS. The actual permissions that they have are managed within the cluster itself.

The second of these users is the external-dns user. We have a number of services in the Ascend environment that have external endpoints. In order to automate and make our operations more resilient to human error, we have an external dns service that watches the “ExternalIP” configuration of services in the clusters marked with a tag requesting DNS. It then updates DNS in our central ops environment according to the observed IP (or hostname). As such, the only access it has is kubernetes service list and describe.

Finally, we have the teleport user. This user is used to orchestrate limited, view-only access for ascend engineers in Enterprise deployments (allowing basic ops triage without granting any access to the underlying clusters, creating a hard barrier between ascend employees and customer data).

In the Enterprise Package, Ascend has constructed security in such a way that the credentials are completely cordoned off, and the credentials themselves are not sufficient to gain access to the customer's data. The second requirement is that the data can only be accessed from within the customer's Data Plane, preventing the access credential itself from being a single point of compromise.

The following resources are present when the environment is at rest. If you are looking to optimize costs, consider purchasing reservations for these resources.

The following costs scale with usage.

The two components that have the greatest scaling cost with ingest are compute (both spot nodes in the Control and Compute cluster), and NAT Gateway transfer costs. From our observations, cost scaling appears to be close to linear with the volume of data ingested. Data backfill is typically the largest single cost that our customers see.

At a steady state, you are most likely to see low recurring costs of ingest (reflected in the spot nodes in the Control Cluster and Data processed costs in the NAT Gateways), and a larger percentage contribution from the Compute Cluster spot nodes, as they propagate new data through your Dataflows.

Updated about 2 months ago