A partition is a collection of records. Every Ascend Component partitions its data set, allowing Ascend to optimize:

Read connectors determine the initial partitioning strategy for the dataset.

Ascend's native blob store connectors default to create 1 partition for each file found; this default can be changed to group many smaller files into a partition through Dynamic Source Aggregation.

For discussion on designing a partition strategy for your data set, please reach out to your Ascend support engineer.

From the returned list of objects, Ascend is able to determine if any partitions are added or deleted. For existing partitions, the fingerprint returned on each object determines if the partition's data has changed. Only partitions that are newly created/updated/deleted, hereafter referred to as "changed" partitions, are propagated for processing downstream through the Transformations.

Each Transform chooses from 3 strategies to process the data set. The chosen strategy will determine:

The below screenshot shows the 3 transform partitioning strategies available in the transform UI: 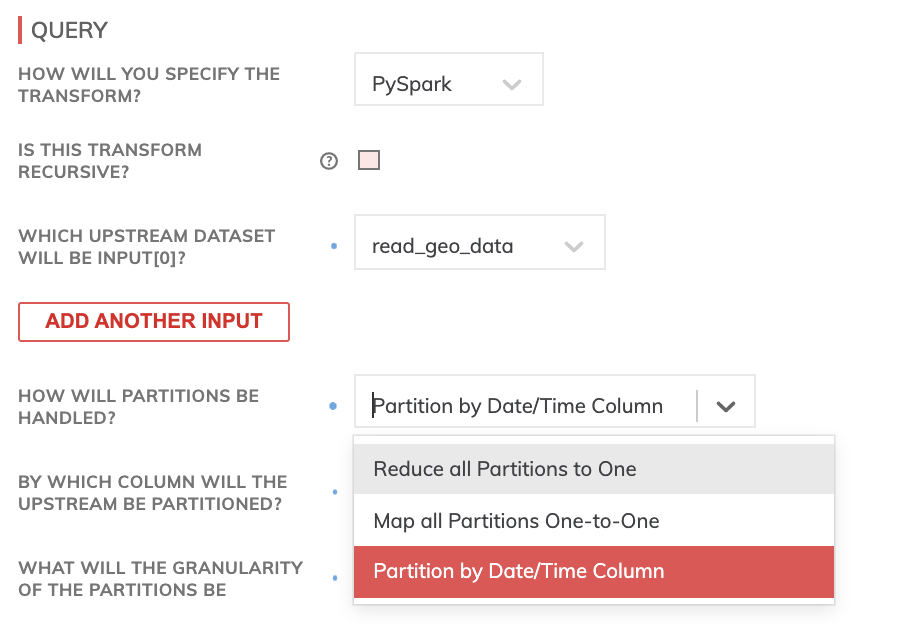 The below table explains the 3 transform partitioning strategies in details: 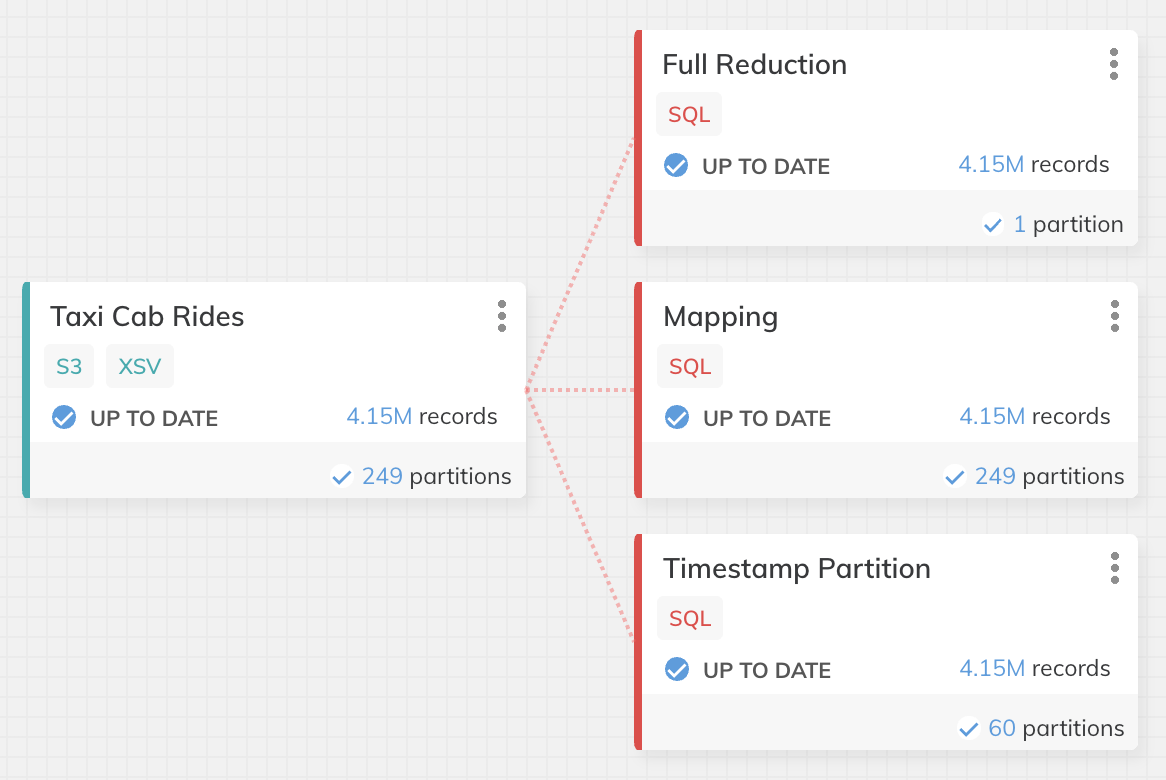 Regardless of which partitioning strategy is used, the Transform will still execute in parallel across many compute resources (a Spark task). Partitioning is an additional level of parallelism above Spark's own internal parallelism and partitioning. For more about Ascend Partitions vs Spark Partitions see this guide.

You choose which partitioning strategy to use when creating or editing the transform. Note, for Timestamp Partitioning, the column to use for selection must already be a timestamp type. 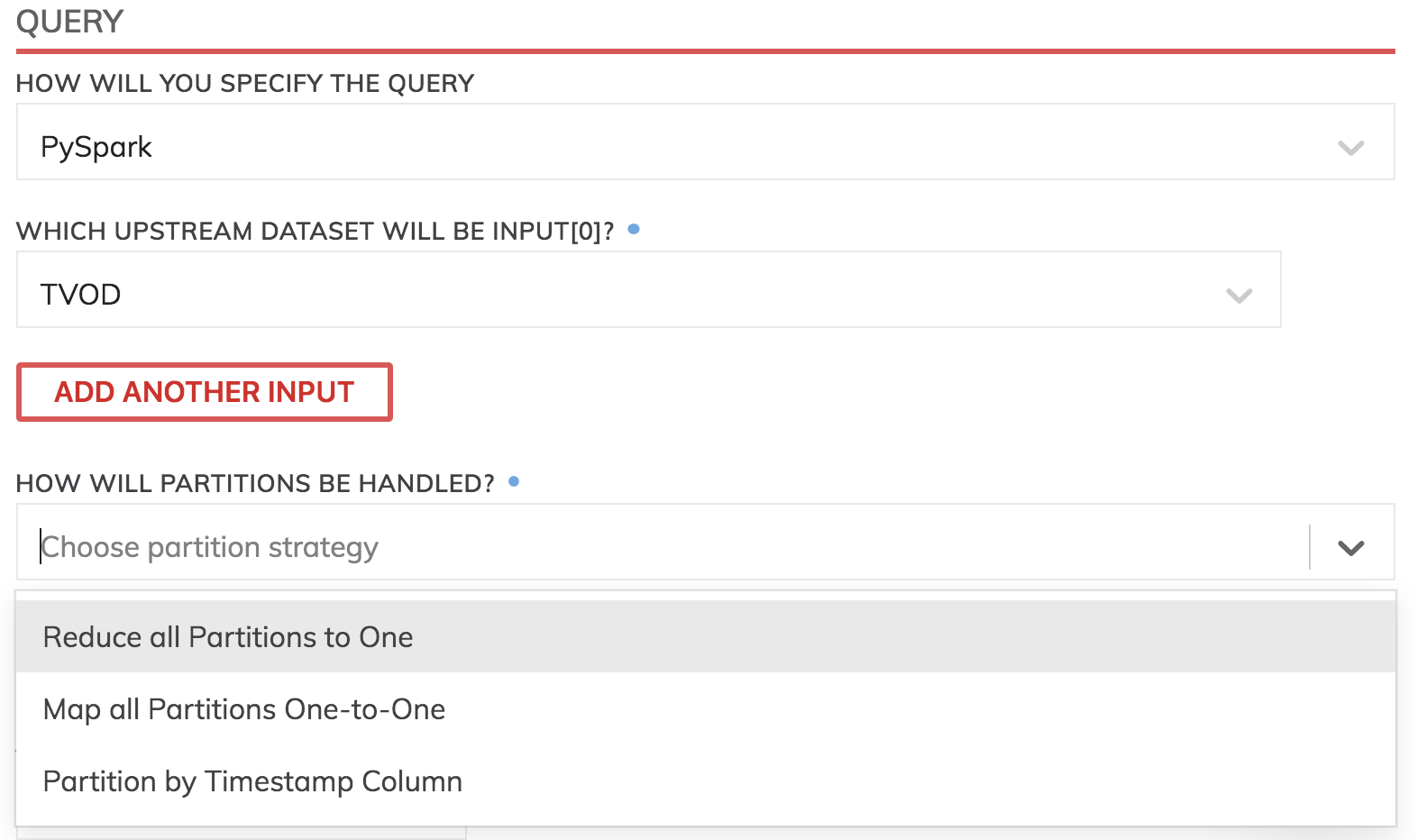 Choosing the Partitioning Strategy in SparkSQL

SparkSQL defaults to a "Reduce all Partitions to One" and this configuration option is available under Advanced Settings.

The partitioning strategy will determine the number of distinct Spark tasks and which records are available in the DataFrame.

The partitioning strategy chosen above applies to input[0], also referred to as the primary input of the component. By default, every other input that is included in the component will be passed in as a full reduction (the entire data set). Given this default, if any partition changes for additional inputs (such as input[1]), then all partitions of input[0] will reprocess. This mechanism allows for data integrity through join accuracy, but does mean that the default pipeline is not incremental. If your business logic allows, (for example, a certain partition of input[0] relates to only certain partitions of input[1], Ascend's advanced partitioning handling allows for expressing these input relationships and maintaining pipeline incrementality and data integrity.

For each input component, partitions can be preprocessed.
In particular, the following operations can be executed at a partition level before the data are parsed into spark dataframes by the transform component:

The selected fields (Ascend URL,Created At and/or Upload At) are added to the records of input partitions

Only partitions whose content satisfy the filter conditions are taken as input. This feature preserves data incrementality across complex pipelines.
Here below are reported few typical use cases:

A user wants to feed forward a certain selection of partitions.
For instance only those that contain records that have been collected after a certain time.
e.g: ts > 2021-02-01

With this setup, any partitions that change before the filtered date will not trigger any data processing as Ascend will filter out those partitions at the metadata layer and then determine that component is already "Up to Date".

A user has a component with 2 inputs, both partitioned by month. They want to run the transform block having as input: 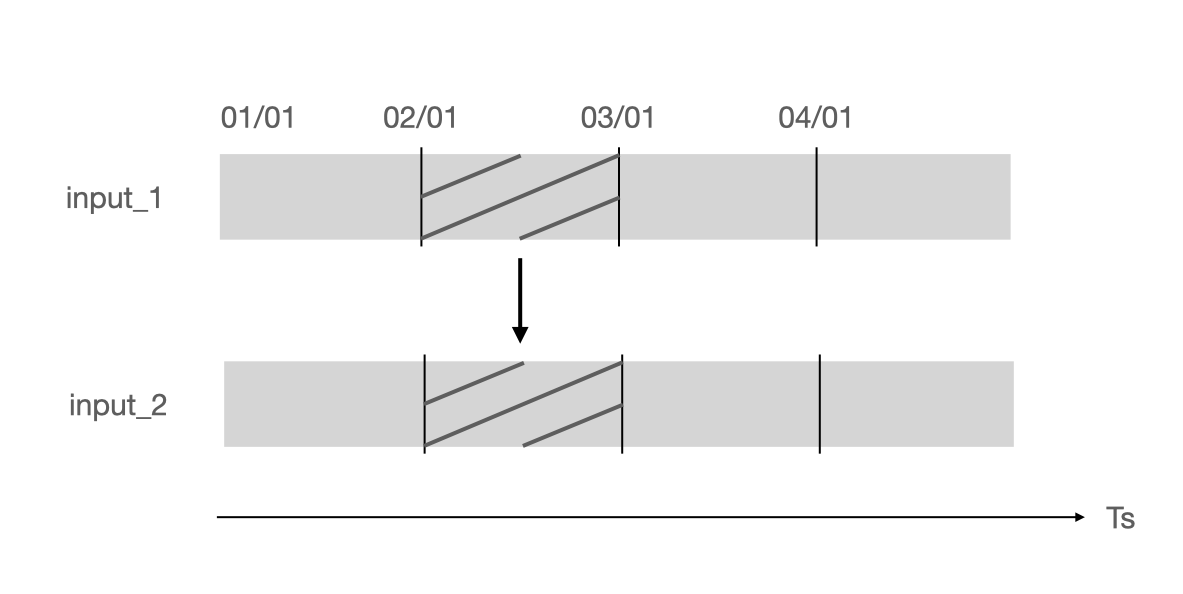 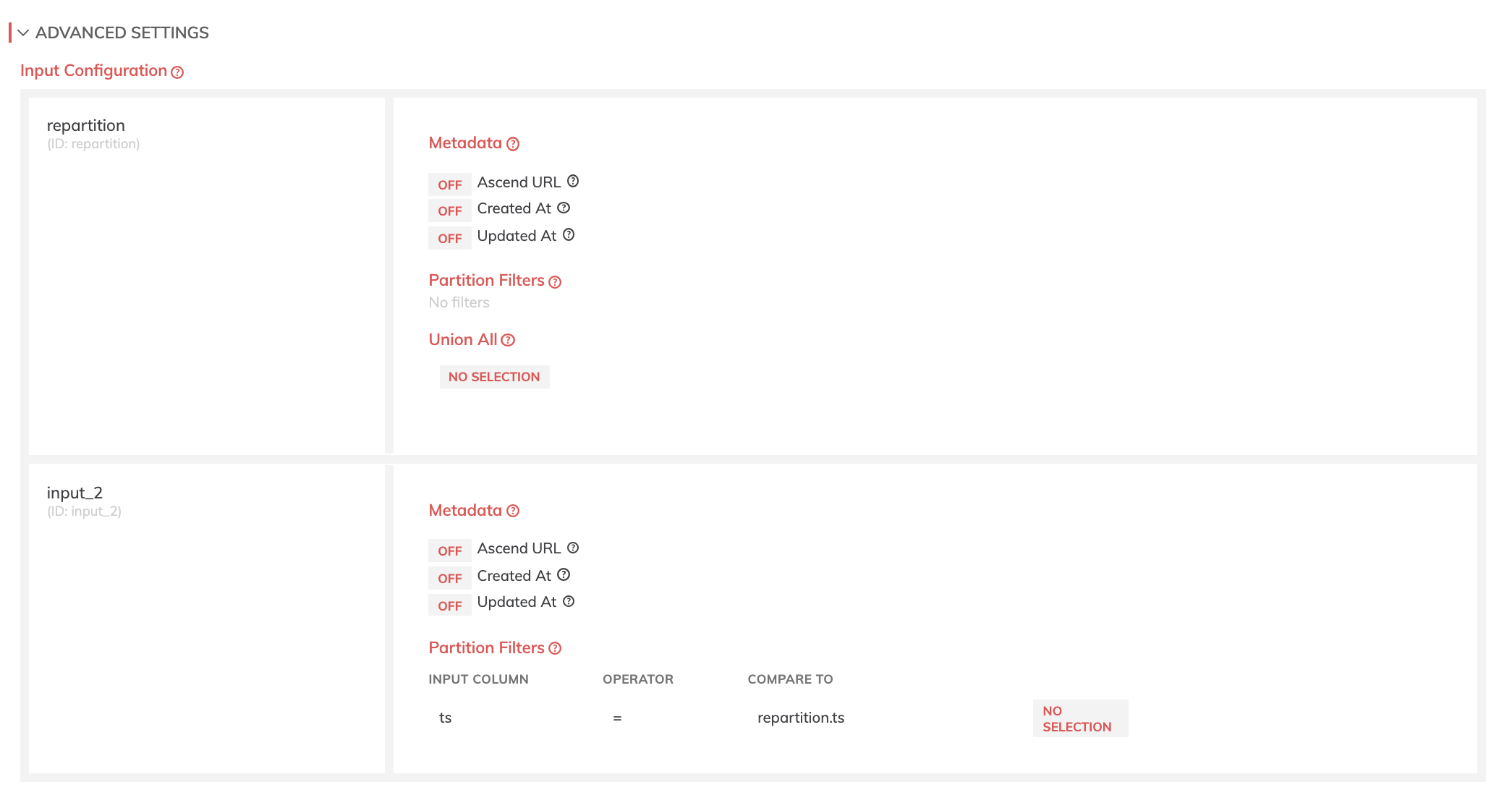 A user has a component with 2 inputs, both partitioned by month.
He/she wants to run the transform block having as input
the partitions from 1 month of input_1 and
the partition of the same and the pervious month from input_2. 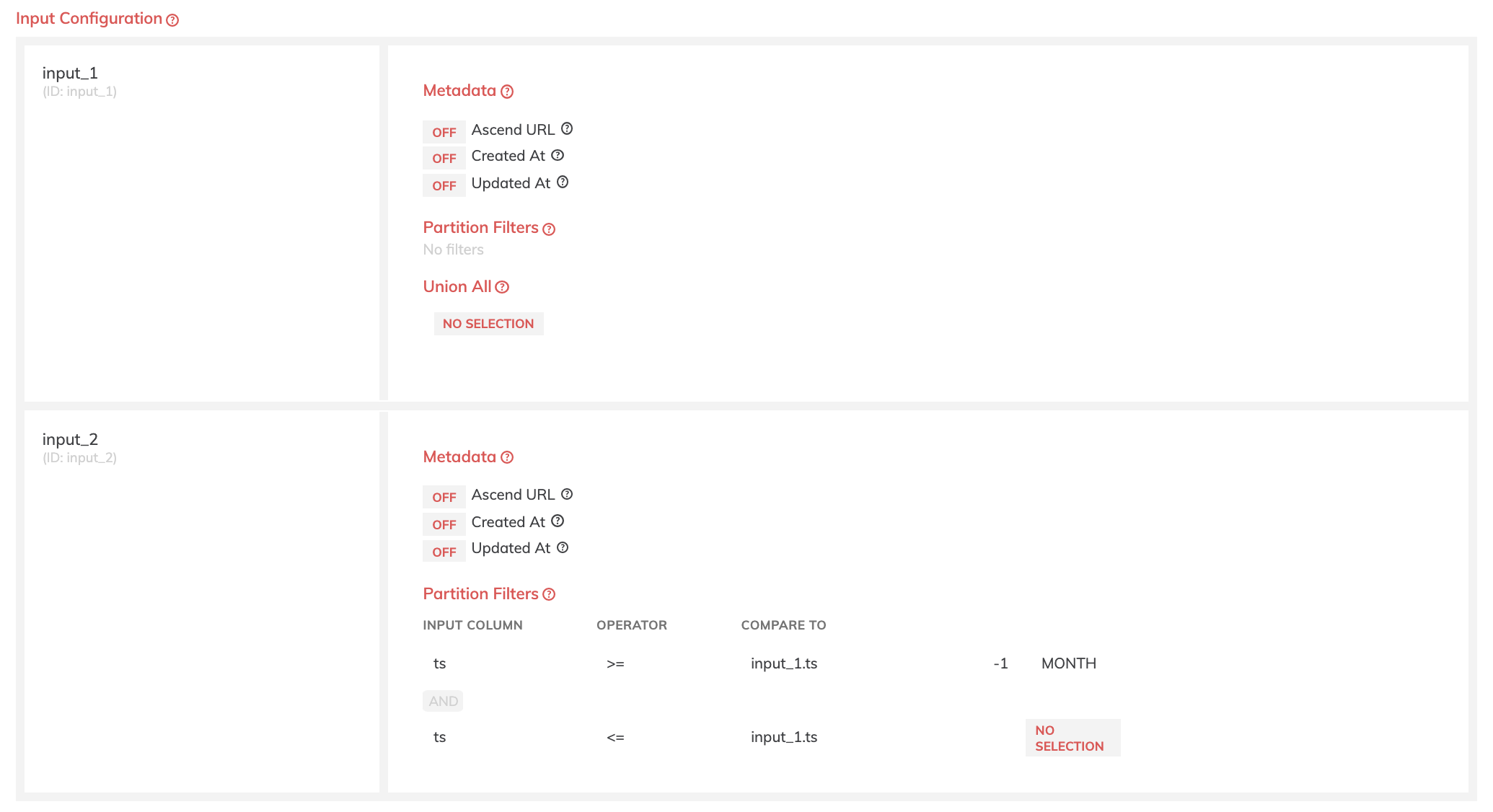 Partitions from other components can be added to the input using this field.

This is handy since only partitions that are created/deleted/updated are reprocessed.
In fact, let's assume to have input_a with 3 partitions and input_b with 2 partitions.
The number of input partitions will be 5 (3+2).
However if all the partitions of input_b are refreshed, only 2/5 partitions of the transform block will be re-processed.

Note: Union can be performed only with components that have the same schema

With an upstream Full Reduction, the Write Connector will generate 1 task to write out the data. Anytime the upstream partitions change, the full data set will be re-written to destination.

With an upstream Timestamp Partitioned, the Write Connector will generate 1 task per partition to write out. This strategy allows for incremental loading and updating of the end destination. Additionally, this strategy allows for creating folders in which the folder name contains a date value from the data. This pattern is common when preparing data for querying in engines such as Athena, Presto, Redshift Spectrum, and Databricks.

In order to take advantage of timestamp partitioning in a Write Connector (for example, to use a column value as part of a date), the Write Connector does not need to be directly downstream of a Transform that partitions the data by timestamp. Any number of Mapping transforms may follow as long as the partitioning column is carried through and the partition structure (each partition containing values for a particular timestamp granule) is maintained.

The below screenshot demonstrates an example configuration.

In this configuration, event_month is the column name from upstream. The date format string used here follows the definitions from Java SimpleDateFormat.

Below is a screenshot that shows the folders and files created by the write connector in the sample S3 location.

Write Connector from a Mapping Transform

With an upstream Mapping Transform, the Write Connector will maintain the same number of partitions in the destination. Partitions with 0 records are discarded.

Designing your overall Dataflow will require some key considerations to choose the right partitioning strategy.

As mentioned previously, each partition operations will generate a different number of queries / Spark tasks when the upstream has more than 1 partition.

A Full Reduction will likely result in better performance than a Mapping or Timestamp Partitioning when creating a downstream Transform. In this example, the overhead of many small tasks in the processing layer will require more resources and take longer to process than a single task would take. Maintaining a minimum task size will help to avoid this inefficiency.

Ascend is a powerful data platform where Dataflows are built once and run forever. This means that when new data comes into the Read Connector, Ascend will automatically trigger the incremental data loading process and update all components throughout the entire Dataflow.

Both Timestamp Partitioning and Mapping do not require fully reprocessing the entire historical data with incrementally loaded data, whereas a Full Reduction will always need to process the full set of historical data.

Continuing the above example, consider a new file added to the data source; it now totals 501 partitions and 5,010,000 records.

The efficiency gains here may merit structuring the Dataflow to maintain incremental processing through Mapping and Timestamp Partitioning and push out Full Reductions only if the business logic requires it and can possibly be done on now smaller sets of data.

Both Ascend partition and Spark partition can be used to describe a group of records, however, they are distinct concepts and should not be mixed:

Spark's repartition and coalesce methods are used to change the number of partitions a RDD or Dataframe has. (coalesce only decreases the count and can help avoid extensive shuffling).
Calling these methods in an Ascend transform does not affect how Ascend partitions behave.
Reusing an earlier example, imagine we have a Read Connector that has 500 partitions totaling 5 million event records. If we create a Pyspark transform after this Read Connector, does a one-to-one partition mapping, and call a .partition(10) in the Pyspark code, the following will happen:

As a best practice, we suggest not explicitly calling .repartition(n) or .coalesce(n), and let Spark figure out its appropriate partition count.