Exporting component(s) within a Dataflow and importing them into other Dataflows allows for quick development as you don't have to build them from scratch each time. Furthermore, exports are simple JSON files that can be pushed into repositories such as GitHub for dataflow versioning and tracking.

click EXPORT on the left side of action bar.

To export all components in the current project, simply click EXPORT on the left side of action bar.

To select individual components hold the SHIFT KEY and click on the components that you want to export together and then click EXPORT on the left side of action bar.

In the Export Components pane, you will find the JSON representation of all the components in the Dataflow or the ones you selected individually.

Use Copy to clipboard or Download to save JSON representation which can be used later for importing into another Data Service or Dataflow. 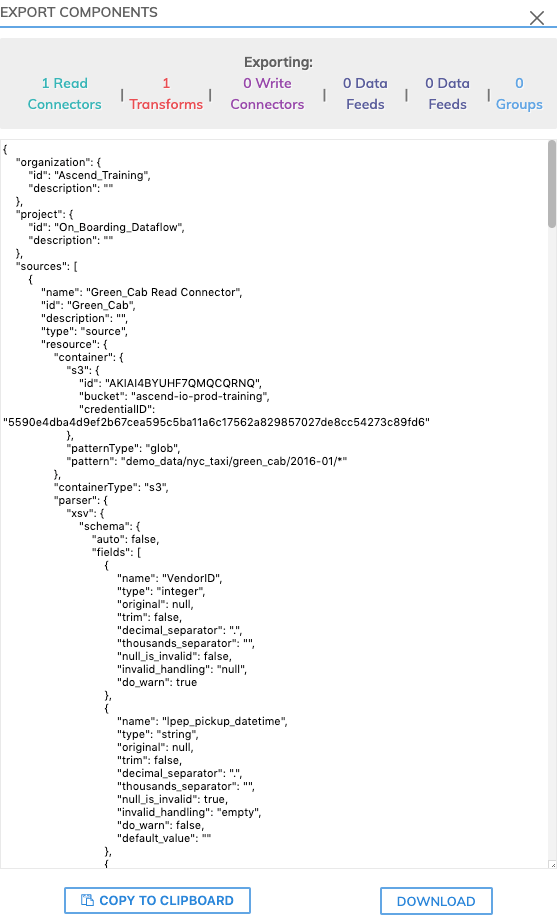 Subscribed Data Feeds and Groups in the Dataflow will not be exported and will need to be recreated as needed post import.

click IMPORT on the left side of action bar.

Paste the JSON configuration in the Import Components text area on the right if you previously copied the JSON components to clipboard.

Alternatively, use the "Upload Config File Here" in the middle of the Import Components text area to upload the JSON config file if you downloaded the graph as JSON file. 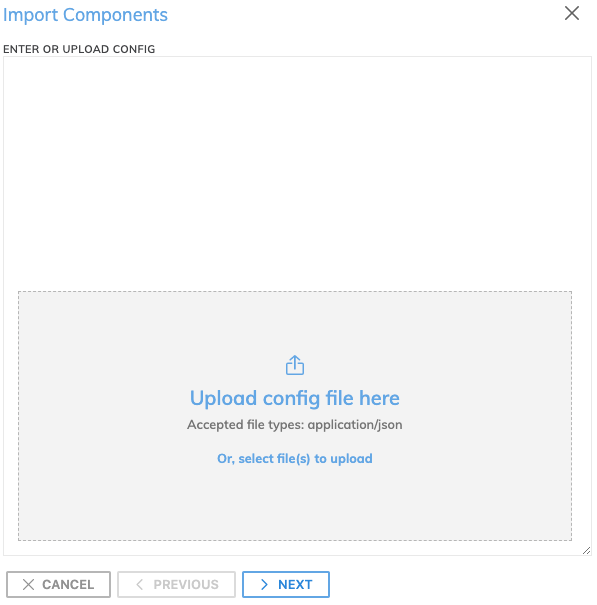 Review and confirm the components to import on top right part of the form. Select NEXT

To exclude one or more components from being imported, you can either re-export from the original Dataflow, or delete the corresponding JSON objects under svsConfigs array in the JSON code.

When importing ead and write Connectors that require credentials you will need to provide proper credentials again.

If the current dataflow has one or more components with the same ID as the imported configuration, you can choose whether to override the existing ones by toggling the button next to each component.

Use caution when importing a Write Connector to ensure:
1.)There's not another write connector in the environment pointing to the same target.
2.) The target does not contain any data as Ascend will delete anything at the target that doesn't belong to the Write Connector.