Reverse SSH is a highly configurable, production-quality, SSH-based solution that customers can choose to implement if they have private/internal data sources (e.g. on-premise) that need to be accessed by their Ascend environment. This feature is available to all Ascend customers.

Reverse SSH relies on outgoing SSH connections from your network. This enables the Ascend cloud environment to make limited connections "in reverse" to your private/internal data sources over the established outgoing SSH tunnel.

If you need to connect to more than two (2) data sources within your private/internal network, please contact Ascend for support.

Share only your public SSH key with Ascend. Always maintain the security of your private SSH key and do not share your private key with anyone!

The customer should first obtain (or create) their public SSH key.

There are multiple ways to create a public SSH key. Below is a sample method to generate an SSH key interactively using docker with a standard Linux container.

Regarding choice of key algorithm and length - Ascend will generally support the recommendations of standards organizations such as NIST (for example, consider NIST SP 800-57 Part 3 Rev. 1). These recommendations and best practices evolve over time, so if you have a specific requirement, don't hesitate to discuss with your Ascend representative.

You might also already have standard tools available in your operating system, such as ssh-keygen, to generate SSH key pairs.

If you need help with this step, please consult with your network/security administrator.

Run a connectivity test to establish the reverse SSH tunnel by running a command similar to the below, which starts an SSH connection in the foreground.

The command below is formatted using arguments that are helpful for debugging/testing connectivity - in production, you may wish to modify some of the arguments to simplify the verbosity of logging, etc.

This will establish a connection to the Ascend SSH Server Host, which serves as a remote proxy in the Ascend cloud environment, to allow Ascend infrastructure to connect through the outgoing SSH connection (from your network) to your private/internal data sources.

TIP: Multiple private/internal data sources can be accessed through a single SSH client connection (if desired). Just specify the "-R" flag and related configuration settings multiple times in the command, once for each pair of Ascend bind address/port and Internal Host/IP and Internal Port Number. For example, you can set up reverse SSH for two different private/internal databases via a single reverse SSH connection command.

When the test connection to Ascend's SSH Server Host (using the above command) is successful, you will typically see a set of debug messages similar to the below: 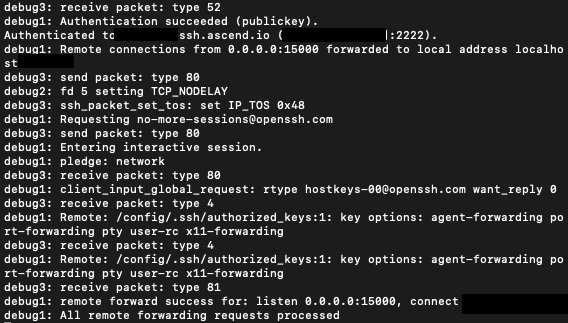 Consider whether you could use tools such as custom scripts, autossh, systemd, or other similar tools to ensure that the reverse SSH tunnel is kept alive and connected to the Ascend cloud environment.

It is considered a best practice (when possible) to create a service account, with its own public/private SSH key pair, that runs the SSH client which establishes the reverse SSH tunnel connections.

When you want to connect from Ascend to your private/internal data sources, you need to use the dedicated "Ascend SSH Server Host" documented below. Every customer environment has its own private Ascend SSH Server which acts as a reverse proxy. You may use this hostname in either Read Connections or Write Connectors, for example. 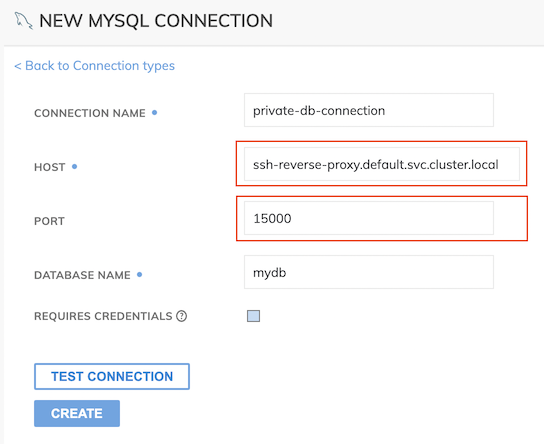 We recommend that once you have entered the necessary connection information to use the Ascend SSH Server Host as a reverse SSH proxy, that you also then click the "Test Connection" box to confirm the setup is completed successfully. This runs a series of connection tests, and if all the connection tests pass as expected (similar to the screenshot below), you have successfully connected from Ascend to your private/internal data source using reverse SSH!

While there are many issues that can happen that impact connectivity over public networks, see below for a few common errors/issues and possible resolutions. Contact us if you need additional support!